Another Bag Of Smarties

Tuesday morning 0630. I met up with Andy at Cockerham quarry where we hoped to catch up with Sand Martins (Smarties). It had been too long since the last visit but an unavoidable break in our plans - Last time.

On that occasion we caught 63 new Sand Martins, all of them adults, late May being too early for any young martins to be around. We did slightly better this morning by way of 67 Sand Martins, 57 of them new to us plus 8 recaptures from earlier this year and 2 from 2017.

Of the 57 new, 40 proved to be adults, split 50/50 male/female together with 17 fresh juveniles. The colony seemed to be well on with their second brood, some females in the throes of egg laying. 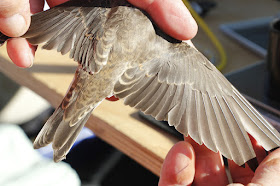 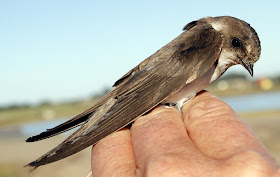 We’d finished our work by 9 o'clock so I went up to Glasson and Conder for a quick check. Fresh arrivals at Conder Green were a party of 4 Avocets, more Little Egrets than of late (6) and also 2 Greenshank. There are still 180+ Redshank. The four Avocets spent ten or fifteen minutes making a lot of noise before they flew off west, leaving the summering singleton but territorial Avocet behind. 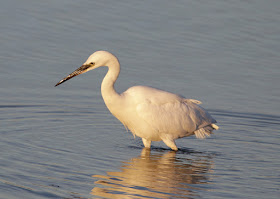 A single pair of Common Terns continues to feed young, 2 chicks on the pontoon, one on the island.

Meanwhile I up at Glasson Dock I found the pair of terns, the ones that bred successfully very close by. 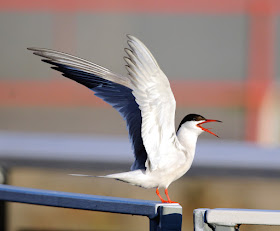 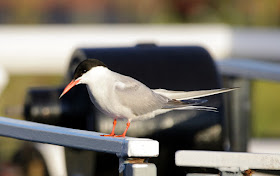 That all for today folks. Don’t forget,  tomorrow’s post will see a review of Unnatural Selection.

Thank you for visiting Another Bird Blog and leaving your message.
I hope to return the compliment so will visit your web page soon.